The Curious Little Drop of Blood 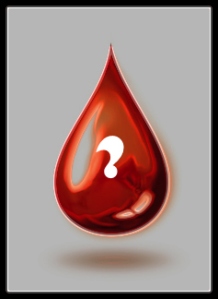 Don’t you hate it when you find a drop of blood on your hand and you can’t figure out where it came from?

It wasn’t a lot of blood, just a drop. Not surprising either. I’ve been tiling and have lots of little nicks on my hands that could start bleeding if bumped or scratched. But none of those seemed to be the source. Wasn’t my nose. Not my arms or face or ears. Typical places I might have scratched. Checked the mirror for clues.

I usually don’t dive that deep into unexplained conditions or curiosities. I wouldn’t get anything done. I give most inexplicities a good shoulder shrug and move on. Good thing my house isn’t haunted. I would definitely deep dive on that, but fortunately that is just a hypothetical scenario.

Good thing I’m not a detective too. I would totally shoulder shrug too many things.  Because however observant and analytical I might be I have little affinity for details (which may seem like a contradiction but I assure you it is not). And sometimes that would be really handy. Probably why I love Sherlock Holmes. He sees the details and makes the connections. Brilliant!

But there are certain things I get hooked on solving more than others:  failed memories of books or actors or movies especially. And I never know when it will happen. Because it doesn’t happen often considering all the things I have forgotten.

Like this Polish-Czech move I saw at a film festival years ago. It was totally bizarre and surreal. I loved it (though someone claims I only loved it because she hated it and fell asleep). I have only the vaguest idea what the name was, which obviously happened to be in Polish so that doesn’t help. It’s that tip of the tongue feeling. But I can’t spit it out.

About a year ago I tried to track it down with the help of the Google, that wonderful memory booster. Nothing. I tried again the other day. Couldn’t find diddly. Now I question my memory even more. Thanks Google, ya jerk. Now I’m not certain it was even Polish.

My favorite obsession was a mix of a book and an actor. It came from reading Charles Dickens’ “Old Curiosity Shop,” which has a character called Quilp, who is described as this scruffy, dwarvish character. And I am totally envisioning him as this character actor I know I have seen. But I can’t figure out who he is. I just know I have seen him in some British period piece. Again the Google is not helping. I even scoured IMDB. Nothing. But I can’t let it go. One day I will see this character actor and yell “That’s him.”

A totally useless obsession. I need to figure out how to translate that random curiosity into more useful pursuits. Like where did that drop of blood come from?

To evoke a smile. That's all. Author of "Methane Wars: A Fable" and "Lear's Fool" as well as various poems and some these painting things as well.
View all posts by joegergen →
This entry was posted in Personality and tagged character actor, curiosity, details, drop of blood, memories, memory, Sherlock Holmes. Bookmark the permalink.