The Rolling Eyes of Truth 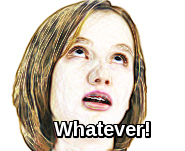 I’m really not much of a liar. I really suck at it. I think it’s because my face gives everything away anyway so why bother.

I suppose deceit is kind of in my vocabulary in that I can withhold truth because I’m pretty good at not saying anything.

In that line of thinking I watched the “Invention of Lying” last night, a Ricky Gervais movie. It’s about a world where people don’t lie. Not because of moral beliefs but because they don’t know what a lie is. It hasn’t been invented yet. But what gives humor to most of the scenes involving lying is not the lying, but the inability for people to filter their honest thoughts (in this case usually negative ones).

The premise was that if you think it, say it. This premise was applied fairly unevenly throughout the movie but we’re not here to dog the movie so we’ll move on.

The movie, though, was clearly written by an extrovert. The idea that if you can’t lie then you must speak your true thoughts is clearly an extrovert idea, the concept of using the act of speaking to think. So the movie portrays a world of people who just blurt things out.

Now if an introvert wrote the movie, the movie might suck because it would be a world of people who thought better about verbalizing the truth and therefore be mostly silent. Well, maybe it wouldn’t suck. It would have to be very different.

It would have to be filled with voiceovers and thought bubbles. There may not be any real dialog at all.

It could get pretty weird. Because the reality is that if you can’t think a lie you can’t express a lie, whether verbally or physically through body language. There is no deception, no deceit.

So no fake smiles. Wouldn’t that be a tough crowd? If someone says a true bad thing about you, you couldn’t even nervously chuckle or smile. You’d have to frown or cry. You couldn’t fake smile at someone’s moronic comments.

The good thing is that I could still roll my eyes, which is one of my favorite things to do, especially in meetings. Because when rolling my eyes I am expressing a genuine feeling, a true (from my perspective) thought. But just like in the movie, the truth is not always appreciated or wanted.

Like they say, the truth will set you free. Whatever! (Cue eye roll).

To evoke a smile. That's all. Author of "Methane Wars: A Fable" and "Lear's Fool" as well as various poems and some these painting things as well.
View all posts by joegergen →
This entry was posted in Freedom, Personality and tagged deceit, extrovert, eye roll, filter, introvert, liar, lying, Ricky Gervais, truth. Bookmark the permalink.