Methane Wars: A Fable – Chapter One 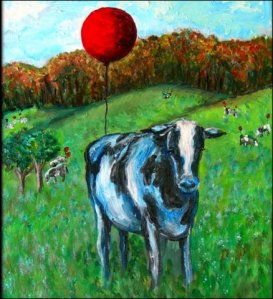 I don’t know when it all started. I just know when my part started. Nine years ago. I was driving through rural Wisconsin. It was there amongst the rolling green hills that it began for me. A green pasture like any green pasture. A herd of cows like any other herd of cows. No, wait. These cows were somehow different. Normal cows for sure, except for the large red balloon floating above each one. One of the cows was backed up against a fence post, swaying back and forth like a bear scratching its back on a tree. She had a red balloon too.

I’m not the world’s most curious guy, but when I saw a guy driving an ATV along the edge of the pasture, I had to stop and ask if he knew what was going on.

I walked from the side of the road to the pasture fence where Brown had gotten off his ATV.

“I have to ask,” I said, “what in the world are these red balloons? And that cow over there scratching her butt on the fence post? That’s a little odd.”

Brown rubbed his face and chuckled. “I have to admit that for as many times as I have seen a cow rubbing her behind on a fence post in the last year, I still find it a peculiar sight. They see one doing it and then they get some fool idea in their head that they should try it. It doesn’t work though. And though apparently a cow can mimic another it can’t deduce that the action is a failure and need not be repeated.” Brown walked over to the post-abusing cow and shooed her back to the herd.

“Dislodging the methane collection device. You can see there that the methane collection device is still firmly attached. The devices are pretty sturdy and reliable now. Not like the early versions, which were too rigid to fit snugly on every cow. Momma cow might have been able to dislodge the original version on the fence but they hadn’t figured out that maneuver yet.”

“Is a methane collection device what I think it is?”

“It is. Just look under the tail there. About the size of a football. Compresses the gases and sends them to the balloon for storage.”

“But if the gas is compressed it won’t float a balloon.”

“Nope. These are actually balloons within balloons with a little helium in the outer shell to keep them afloat. Otherwise the balloons get trampled.”

“So you’re really collecting flatulence from cows? That sounds, well, I don’t know like what.”

About three years earlier Congress had passed the Coal Elimination Act. I had never heard of it. Apparently not many people had. Well buried amongst numerous initiatives and regulations to curb the use of coal was the Bovine Methane Collection Measure, or BMCM.

The BMCM was intended to roll out and enforce the mandatory collection of all bovine emissions. The initial collection devices had been developed by a quasi-government agency and were available in limited quantities to select farmers as soon as the measure was passed.

The scope of the measure was staggering, considering its relative obscurity. Every cow in the country was to be fitted with a collection device. All that gas was to be collected and then separated into distinct gases: nitrogen, carbon dioxide, hydrogen, oxygen and methane. Each gas would then be put to its different uses. There were even mandates for the development of agricultural equipment to be powered by these gases, the most obvious being methane. Unused quantities could be sold back to local industry. Under no circumstance were the gases to be released.

“The big problem with the early models is these collection balloons,” Brown went on. “This herd hasn’t been upgraded yet to the new canister models. The balloons do float out of the way but when the herd starts milling around together in close quarters the balloons get all tangled. That’s when the balloons start pulling the units off.”

“Have you seen the newer units?” I asked.

“I’ve got another herd with them. These newer units have a miniature compressor built in that compacts the gas right into a small canister. They even have a gauge telling you when it’s full enough to collect. They have a quick release to swap them out quickly which saves time but it’s still one more thing to do on a farm where there is always plenty to do.”

“So what’s the benefit for you if this creates extra work?”

“I guess for us framers it’s been a little better than a financial wash,” Brown said. “We’ve converted quite a few machines to be methane powered so we’ve reduced our outside fuel consumption quite a bit. And we can sell off some of the other gases, like the nitrogen, which if we had the equipment we could convert to fertilizer but that’s one more machine to maintain and more time we don’t have. But they say that energy consumption (that is, energy that has to be brought in) has decreased in the agri-business sector by twenty percent in the last two years. That brings demand down so energy costs should decrease in the greater economy. But I don’t keep up with all the latest statistics.”

“So the idea is that you become more self-sufficient?”

“I‘m sure that’s part of the equation. It’s mainly about using less coal and oil. And it’s good for the environment too. Reducing all that methane release helps air quality. And with the imminent closure of the coal plants, using methane instead of gas or propane, or even electricity, leaves that much more of those resources to replace coal power. I mean, that’s where it all started.”

“How did I not hear about this? This has to be a huge undertaking. And it has to be a lot more work for you.”

“It’s kind of a pain. And lest we forget that it‘s mandatory. Mandatory means rules and regulations and inspections and quotas. I have a person who spends ten hours a week dealing with the bureaucracy. She tells me they are planning to roll out new nutritional guides aimed at increasing methane production, which seems odd to me. They’re not interested in the agricultural impacts of changing the cows’ diets. Just some wonk trying to make a name for himself. I just know if milk production goes down I’m complaining.

“Oh look, some tourists taking pictures of the cows and their methane units. Still kind of a novelty to some people. We have people stop by and say, “You’d think without all that methane leaking out the farm would smell better.” Very funny. Sorry, cow shit still smells.”

Yes, cow shit does smell. But the idea seemed to have merit.

To evoke a smile. That's all. Author of "Methane Wars: A Fable" and "Lear's Fool" as well as various poems and some these painting things as well.
View all posts by joegergen →
This entry was posted in Methane Wars and tagged cows, environment, green house gases, methane wars, politics, satire, society. Bookmark the permalink.