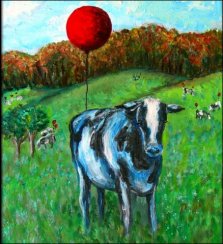 The first time I saw Meisner on television I didn’t know who he was, and I worked for FemCad. His official role at that time was Press Officer. Apparently was brought on to do a better job at communicating FemCad’s mission and role. FemCad certainly had an image problem: they were several steps beyond the bad rap of a proctologist.

Meisner was the mind behind the Green Caps. He had engineered the whole organization with its mission and modus operandi. That was FemCad’s first obvious foray into communication, which included controlling a message to the youth and consuming the information the youth fed back to them. FemCad began to test their desired communications on the Green Caps, adapting and honing the message before putting it out for mass consumption.

Meisner started out as a wartime cheerleader, touting all the benefits of the Methane Collection project, reporting all the progress being made, all the crises averted, all the energy saved.

Meisner’s propaganda even highlighted competitive sports that had popped up: individual and team competitions over who could produce the most methane in an hour or day or week. Meisner drizzled patriotism all over it. I suspect the motivation to compete came from somewhere else. Of course, Meisner didn’t mention the cults that had sprung up celebrating methane collection as way of life. Kind of like Buddhists practicing yoga, but different.

Slowly, Meisner shifted his attention toward what became known as the Rhetoric of the Methane Wars: a slow building rant against those who avoided methane collection and those who aided this avoidance. War against anyone who questioned the mission.

If Prohibition had Capone and Ness, Methane Collection had Alvarez and Meisner. The Methane War’s rhetoric quickly escalated past.

At first Meisner’s propaganda war was just that: a propaganda war. Combined with the ever-present Green Caps the FemCad rhetoric was omnipresent. Whether it had an effect on the psyche of the people I don’t know.

The war of words was endless. Meisner commissioned endless high profile public information campaigns highlighting the dangers of Anti-Matter and Black Gas. Some of what they said was true.

The other side of the public information campaign was to make sure everyone knew the consequences of avoiding methane collection and the aiding and abetting thereof. Billboards and TV commercials outlined the range of fines, house arrests and prison sentences for violations.

Then the rhetoric spilled over to enforcement. Meisner knew enough to know his rhetoric needed some teeth. More teeth meant more effort and more effort meant more people and more people meant more bureaucracy. The problem was that the Methane Collection bureaucracy was already staggering under its own weight. Even disregarding the fiscal cost, there was no way FemCad could crack down on every infraction.

Meisner knew this well enough himself. As much as he wanted to prosecute every two-bit offender, he knew he couldn’t. He instead chose to play the game of perception-is-reality. He wanted you to be too afraid to even try.

No extra resources were devoted to enforcement. No internal priorities were changed to increase efforts. However, Meisner created a special strike force to identify and take down high profile offenders. The press was what Meisner was after. And he got it. Perhaps with little prodding, the media extensively covered every famous or wealthy person brought down by FemCad.

The message: no one was above the law. Meisner made sure that not only were the arrests high profile but that the trials were as well, dragging them out until the effect wore off.

There was the Albert Lancer case. Famous basketball player, caught buying Anti-Matter. No one was surprised, but the trial dragged on and was televised. Besides his getting caught, there was nothing special about the case. The case was pumped for all it was worth and then let go. Lancer was fined by FemCad and suspended by the basketball league. And then they moved on to the next high profile case.

While FemCad didn’t increase enforcement greatly, they did change the penalties for infractions. Meisner was behind this as well. For Meisner this was a psychological war. He did not want to put all these offenders in jail and knew the government couldn’t afford it. He convinced FemCad to eliminate jail time for avoidance but to increase the fines. In the same stroke the sentences for distributing anything related to methane avoidance were upped to the same level as distributing Anti-matter, life in prison. The propaganda machine clearly believed increased fines and fear would deter methane collection avoidance.

While enforcement policies certainly had their effects, Meisner and his propaganda machine became so much white noise. He even had celebrity endorsements of methane collection, just like those “Got Milk” promos that were everywhere at one time. Soon they had no staying power and probably no impact. All sound and fury signifying nothing. In fact for a while even Meisner was out of sight. The cat and mouse game between FemCad and the distributors stabilized for about a year. Then a switch was flipped. Meisner was back.

First, the strategy from up top changed. After a couple years of flagging collection rates, FemCad had had enough. Fortunately for them, their frustration was in synch with the coming renewal of the Coal Elimination Act. Clearly progress had been made in the use of non-coal energy sources. Across the board, renewable energy sources had gained ground. Obviously as the demand for coal had gone down so had the mining of coal, which in turn equalized the rate of drain on the coal reserves. So when it came time for yet another renewal of the Coal Elimination Act, the prognostication for the Coal Day zero had stayed at seven years, which if viewed in the terms of short political memory means no progress had been made. And if we had made no progress of course the logical political conclusion was that more extreme measures must be taken.

That was FemCad’s view. And with what I am sure was prodigious amounts of lobbying, FemCad went to make the case for more extreme measures. They had ammunition. All their research into diet hadn’t gone for naught. This was the time to strike. Collection volumes had become stagnant. The US population wasn’t going up and with enforcement struggles continuing, the only way to increase volumes was to increase output. And to increase output you needed to control input, or in the case of humans, control diet.

FemCad did not want to give you dietary guidelines. Guidelines could be fudged and ignored. They went all in. FemCad was going to feed you.

They lobbied for revisions to the Coal Elimination Act’s Methane Collection Measure. They burned through a lot of lawyers crafting the exact words to be amended. Many versions of the measure were bandied back and forth. Many political promises were made. Many political favors were called in. Many cross your hearts and hope to dies were made. In the end they found agreement on what Congress would pass and what the President would sign. FemCad took control of your diet.

The second change was FemCad’s tactics on enforcement. Apparently, all those inflated fines had been put to good use. A massive increase in highly trained FemCad goons were brought online to hunt down traffickers.

Whether it was easier to start at the end of the supply chain because you knew where to look or whether the legality made it an easier target, I am not sure. But it was immediately clear FemCad was going to work its way backwards. With threats of outrageous fines and prison sentences for Anti-Matter users, FemCad would turn as many arrestees into state witnesses as possible.

I was still living the double life of collection agent and Anti-Matter distributor when I ran into one of Alvarez’s lieutenants, Dubjak. I had cut back quite a bit on pushing Anti-Matter, partially because I had plenty of money but mostly because enforcement was out of control. I continued to distribute because I believed in selling freedom. But freedom was becoming very dangerous.

“Half our distributors have been hauled in over the last few months,” said Dubjak. “They’re throwing around threats of death sentences left and right. Trying to turn state’s witnesses. FemCad is out of control. The legality of it doesn’t seem to even matter anymore.”

“Are you running out of dealers?” I asked.

“How many have turned?” I asked.

“A couple of middlemen have been named around here. We got them out before they got picked up. We sent them north to work. I’ve heard they have a couple middlemen in custody back east. I know what the old drug cartels would do. No witness, no problem.”

“What’s Alvarez think of this? People are going to get caught.”

“What’s worse than the death sentence?”

“Oh no. Bigger risk, bigger payday. You know how it works. The lure of big money. But FemCad’s not after the distributors. They’re after Alvarez and our circle. They’re after the source. They’re not interested in how many bodies it takes to get to us.”

“Yep. We’ll just have to find a way out. That’s the way trafficking is.”

Then there was Methane Nutrition Program passed with the latest renewal of the CEA. Methane and nutrition aren’t really two words that should go in the same sentence but here they were. It was like universal healthcare except it was universal nutrition—with an agenda. The sweep was broad and blunt. They at least had the decency not to claim it had anything to do with health. Controlling nutrition was about maximizing how much gas you produced.

The research was so thorough and expansive that FemCad believed virtually no one would escape without a quota. Your body chemistry would be tested and a nutritional plan would be devised. Most people fell into one of five categories, which made it possible to create five main nutrition plans. How they would handle those who didn’t produce was unclear. The assumption being that if you didn’t produce on the state-provided diet you either hadn’t consumed the diet or you used Anti-Matter.

The implementation of the Methane Nutrition Program was staggering in scope. The entire agriculture industry was essentially nationalized by virtue of being told what to grow in order to fulfill the needs of the nutritional plans. They had quotas and directives to fulfill.

The supermarket industry was nationalized. Grocery shopping as anyone knew it ceased to exist. Grocery stores became giant food shelves that simply distributed rations based on nutrition plans. You brought your voucher and received your weekly meals.

An army of bureaucrats nationalized the food sector in a couple months. People complied. There was really no option. No one was happy about it, but you had to eat. Eating monotonous government meals for a few months turned compliance into anger.

To evoke a smile. That's all. Author of "Methane Wars: A Fable" and "Lear's Fool" as well as various poems and some these painting things as well.
View all posts by joegergen →
This entry was posted in Methane Wars and tagged Coal, dystopia, environment, greenhouse gases, methane wars, satire, society. Bookmark the permalink.