The Magical Power of Arbitrary Thresholds 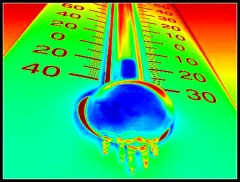 It’s six below. Yes, that’s pretty cold. It’s certainly colder other places so this isn’t about how cold it is here.

It’s about that pesky negative sign. You see six below is cold but so is two above cold. They’re really not that much different. On an intellectual level I know this.

But there’s something about that negative sign. It’s like an evil talisman attached to the temperature. As soon as it shows up I feel instantly colder. I feel instantly less inclined to go outside. Everything about my attitude changes. I mean, I do fight back. I’m not just going to take it. But I have to make a conscious effort to fight back.

It’s so weird. It’s some mental barrier that’s been attached to some random number. Why does this have power over me?

Another mental barrier number for me is seven. As in seven a.m. Getting up before seven is a huge challenge and dreadful inconvenience. Even 6:55 causes panic and consternation. Oh my God, I’ll have to go to bed early to get up that early. Turn that alarm ten minutes ahead to 7:05 and all is good with the world. I can stay up all damn night. I think I’ve been that way since junior high when I was put in charge of getting myself up and at it. It’s a horrid mental hurdle. I probably need therapy for it.

Thirty minutes is another one. As in a thirty minute commute. I’ve worked in a lot of different locations and so my commute has varied over the years. Anything over thirty and my life is being ruined and time sucked from me by a giant soul-sucking vacuum cleaner. Under thirty minutes and life is good.

These are such clear delineations. I wonder how many others I have. Maybe a lot of them. Who knows. Maybe these are just the easy ones to notice because they’re attached to a number, something specific. Are they good or are they bad? I suppose they’re bad because they introduce totally unnecessary stress.

Maybe they’re like bad habits. They just need to be reprogrammed with positive reinforcement instead of negative. Rewards instead of angst. If I have to get up before seven I get a reward like a double espresso with a dash of cream (though I suppose that could create quite the caffeine dependence if it the dreadful pre-seven waking went on and on ). Or if there is an awful negative on the temperature reading, I get steaming hot chocolate. Nummers.

If the commute is over thirty minutes, then I get, a… um… hmm… I got nothing. Just say no to thirty minute commutes.

To evoke a smile. That's all. Author of "Methane Wars: A Fable" and "Lear's Fool" as well as various poems and some these painting things as well.
View all posts by joegergen →
This entry was posted in Personality and tagged alarm clock, arbitrary thresholds, cold, commute, habits, mental blocks, negative sign, temperature. Bookmark the permalink.

2 Responses to The Magical Power of Arbitrary Thresholds