No One Wants to Come Over for Dinner 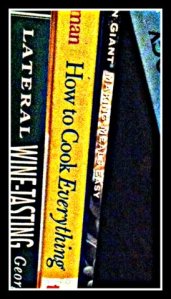 “How to Cook Everything.” The title on the spine of the book tells me it knows such secrets. Everything? That seems rather daunting but I suppose it is possible. You give me the basics and I should be able to run with the rest. I’m not much of a cook so teaching me anything would be an improvement.

Though I think I would be more intrigued if the title were “How to Cook Anything.” I’m not sure why I find a distinction there but I do. The realm of possibilities seems to just explode in front of me with the word anything. Anything? Yes, anything.

My first thought was can you teach me how to cook the books? That might come in handy if I ever became desperate. Though my skill with numbers is so low I might end up screwing myself.

My second thought was can you teach me how to cook a human leg? Not that I would ever be in a position to need to know but thought perhaps someone might actually know. Yes, that’s creepy but they did say everything. Let’s move on.

And I suppose when they say everything they mean actual edible things. Though I suspect you could argue that edible is equivalent to won’t kill you, and so again opens up the possibilities of what everything might mean, which is probably related to the invention of the corollary that states just because you can cook it doesn’t mean you should.

I think maybe I need a book that is called “How to Cook Anything and Not Kill Yourself.” That would be useful. I need to hire someone to stand nearby when I’m cooking. Their only job would be to stand there and when I wasn’t sure I could look at them. Like when I grabbed the basil and held it over the tomato soup I could look and they might nod yes. Or when I chop up some belladonna and hover it over the omelet they would shake their head no, kind of like when the toddler is about to put a bad thing in their mouth and the parent says no. Except I’d be like the kid who waits til the parent looks away and then slowly move the bad thing toward my mouth again. I’d be a bad child.

No wonder no one wants to eat my cooking. Probably seems like a life a death choice every time I offer them food. They don’t seem to believe I have a survival instinct too. Sure the food might suck but it usually won’t kill you. I mean come on, I read the book.

To evoke a smile. That's all. Author of "Methane Wars: A Fable" and "Lear's Fool" as well as various poems and some these painting things as well.
View all posts by joegergen →
This entry was posted in Food, Personality and tagged cookbook, cooking, Food. Bookmark the permalink.

8 Responses to No One Wants to Come Over for Dinner